For good or for bad – as odd as it may seem or perhaps not odd at all, no one has ever accused me of being funny.  I mean truly, outrageously funny.

In my defense, I certainly have been accused and am proud to accept the title of being nerdy. (And that would be the truly, outrageously nerdy type!)  For goodness sake, I put my glasses around my neck on a little lanyard to keep track of them; and, I use (and like) the word lanyard.  In fact as a youngster, I attended what I fondly call “Catholic Camp” (yes, laugh here as I attended Catholic Camp many times); and during the many hours of Catholic Camp free time, I made dozens of lanyards for my family and friends; hence, just an example as to why folks might have given me the moniker of nerdy.

But funny . . . not so much. That’s not to say that I don’t have fun on a moment to moment basis.  Humor is a welcomed sidekick throughout my life – both home and work.  In fact, my work life is on a college campus and college students are just plain, right to the bone, hysterically comical. No humorous opportunity is wasted. College is just crazy funny 24/7. Flash mobs, well they’re fun, but even better when college-naked.  Bocce, a great game –  but play it with frozen turkeys.  The campus newspaper,  use it either to seriously inform the general public or to set the record for the not-so-hidden sexual double entendres – which are crazy funny. College wear – college hair – college walk – college talk . . . crazy-funny 24/7.

A college campus is like an automatic bid into the crazy-funny hall of fame, no questions asked.  It is a hotbed of opportunity for hysterical moments with nothing being considered even in the least bit sacred; thus, everything is fair game.  Time and time again, I have witnessed some true oddities in the hallowed halls of learning.  Not too long ago, the life-size statue of Abraham Lincoln, a wonderful donation to the campus by a wonderful artist, was wearing a Cubs hat and smoking a cigar. A little later, two baby ducks strolled by and it’s indoors.  And perhaps that’s the key . . . there are no exceptions to what can become crazy-funny.

With that concept so noted, I began to wonder about the rest of my world. Just who are the funny people in my home life?  And what exactly makes them crazy-funny?

My pop is certainly on the crazy-funny list.  He didn’t, however, start on it.  Rather, like a fine wine, he aged into it.  He makes the list because he is “parental” funny.  Nothing in particular, but everything in general. He wears funny tennis shoes – which are a color that is indescribable, and the color, is, well . . . funny!  It’s not white.  It’s not brown.  It’s not tan.  It’s . . . something else.  Think of the color of concrete in the form of tennis shoes.

And as far as his skills with technology, let the crazy-funny marathon begin!  Not sure if he has a debit card, know that he doesn’t pay his bills electronically, bottled water is a waste of good plastic, he has a wonderful computer complete with a floppy disc drive and a three inch screen, and he certainly doesn’t have need for a cell-phone.

Heck, he just recently eliminated the rotary dial black telephone with the twelve-foot cord that hung on the kitchen wall. And, I think he just moved it for use in the basement, because “it still works, dadgummit!”  Blue Christmas lights line the living room ceiling; and, it is hoot when they are illuminated usually on a random Tuesday in the middle of the summer.  Some say why . . . he says why not.  Just small examples of why his entire life is just plain crazy-funny at the moment.

And my pop isn’t the only crazy-funny man in his family. His family had some humor genetics a-happenin’.  My uncle (my pop’s brother), God rest his soul, was ditto in terms of crazy-funny. Imagine my uncle’s cooking skills as being similar to my pop’s telephone skills.  Uncle Bud made grilled cheese sandwiches with white bread, plastic wrapped Kraft American singles, and butter.  As the bread would pop up from the toaster, he would slap on all ingredients, open a lengthy and heavy book at its center (preferably one that he had already read), jam the sammie into the book, slam it shut, and wait. And then eat it!?!

This comical gourmet cooking scenario hit the crazy-funny charts each time it was completed or re-enacted in front of a live audience.  When imagining this grilled cheese quest, think of a combination of Jerry Lewis and Knute Rockne – straight up comical with amazing mental and physical athleticism.  Without a doubt, Uncle Bud was crazy-funny, and not just when he was cooking for a crowd.  Though I can’t exactly put my finger on it, I think his status as crazy-funny emerged because he seemed to be truly oblivious to his comical nature.

People who are funny are funnier if they don’t know they are funny.  Such was my uncle.

And, of course, I have learned that crazy-funny comes when we are willing to see the humor in ourselves and laugh about it with each other. 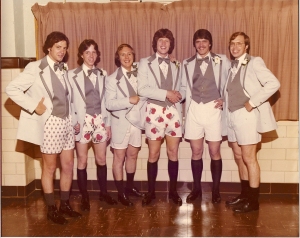